Studies are conducted in adult male and female Sprague Dawley rats (Envigo) in an AAALAC-accredited facility with approval from an Institutional Animal Care and Use Committee, and implemented in accordance with the Guide for the Care and Use of Laboratory Animals 8th Edition (National Research Council, 2011) with standards set by the National Institutes of Health.

Paclitaxel is a commonly used chemotherapeutic agent in the taxane class which has been shown to produce neurotoxicity and sensory neuropathy, which is often reported as numbness, tingling, or burning pain. Administration of paclitaxel (4 mg/kg, i.p.) on alternate days over a 7-day period in rats is an established model of chemotherapy-induced peripheral neuropathy (CIPN) resulting in mechanical and cold allodynia (Boyette-Davis et al., 2011; Polomanoa et al., 2001). The dose of 4 mg/kg i.p. was chosen after thorough evaluation of different doses of paclitaxel (2 mg/kg i.p., 2 mg/kg i.v., 4 mg/kg i.p., 6 mg/kg i.p.), by looking at pharmacokinetic parameters, development of mechanical and cold allodynia, and health of the animals.

In the paclitaxel CIPN model, mechanical allodynia using von Frey filaments and cold allodynia using acetone evaporation are assessed using appropriate group sizes determined by power analysis. Male and female rats (n=8-10) are evaluated in separate cohorts. Dose-responses are investigated, and vehicle and positive control groups are included to establish the validity of the experiment. The experimenter is blinded to the treatments, and dosing is performed by an independent experimenter.

The area of the hind paw tested with von Frey filaments or acetone is located in the center of the plantar surface, avoiding the foot pads (X on Figure 1A). 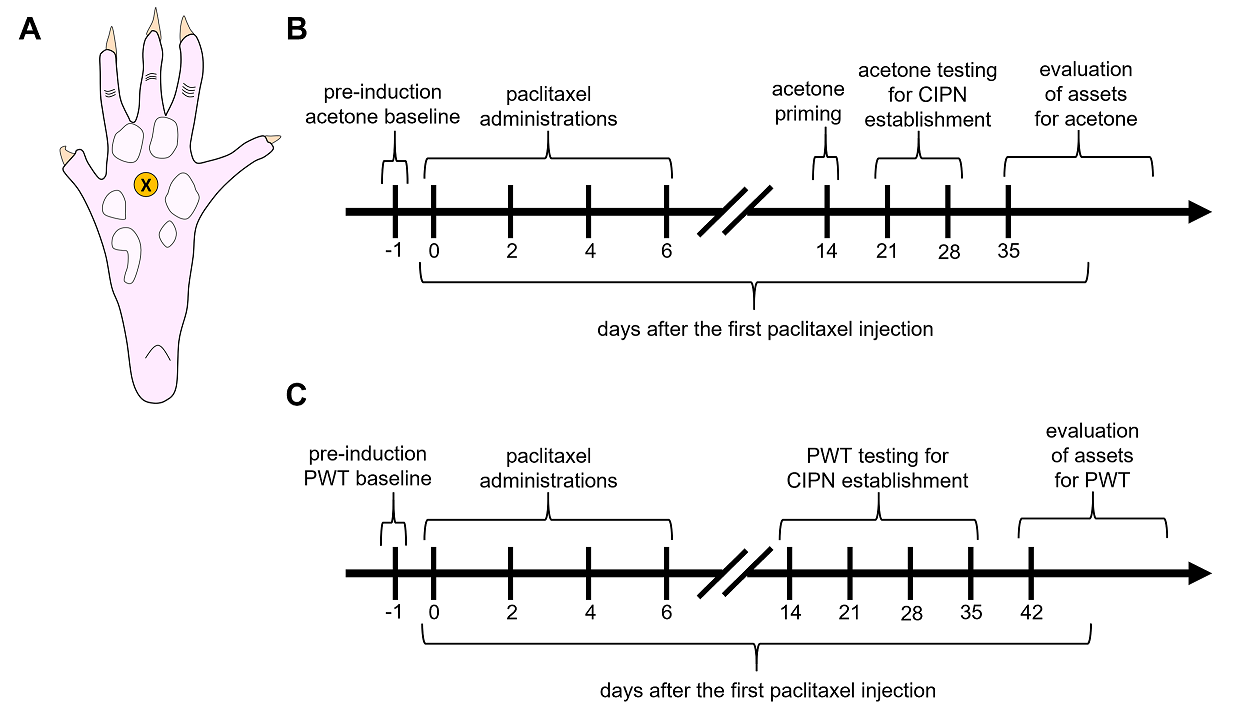 Paw withdrawal threshold (PWT) is assessed using the up-down method (Chaplan et al., 1994) for both the left and right hind paws prior to CIPN induction (Figure 1B). The development of hind paw tactile hypersensitivity is determined by testing the animals using von Frey filaments once per week during Weeks 2-5. During week 6, rats with average PWT ≤4.0g are included in the subsequent testing of the asset’s efficacy to treat mechanical allodynia in paclitaxel CIPN rats.

The number of positive responses to acetone trials (Choi et al., 1994) is assessed for both the left and right hind paws prior to CIPN induction (Figure 1C). During Week 2, all rats receive cold priming with acetone. The development of hind paw cold hypersensitivity is determined by testing the animals once per week during Weeks 3-4. During Week 5, rats with average scores ≥2 are included in the subsequent testing of the asset’s efficacy to treat cold allodynia in paclitaxel CIPN rats.

This work was conducted by PsychoGenics Inc. (Paramus, NJ) in collaboration with PSPP, NINDS, NIH under contract # 75N95019D00026